When A Little Knowledge Can Be Dangerous 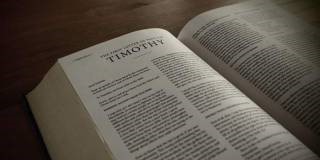 As I urged you upon my departure for Macedonia, remain on at Ephesus so that you may instruct certain men not to teach strange doctrines, nor to pay attention to myths and endless genealogies, which give rise to mere speculation rather than furthering the administration of God which is by faith. But the goal of our instruction is love from a pure heart and a good conscience and a sincere faith. – 1 Tim 1:3-5 (NASB)

Last week we began a series looking at Paul’s first letter to Timothy. We are looking at how this epistle can help us be more effective in sharing the gospel.  In particular, we are exploring what we can learn about how our speech and conduct affects our witness and the church’s overall mission.

Opening the letter, we instantly run into a main theme throughout this letter.  Knowledge apart from spiritual discernment is dangerous.

Paul begins his letter with an instruction for Timothy that he remain on in Ephesus, despite the many challenges he faces there. It’s an instruction for the young leader of this church to redirect a flock that is wandering.  And they are wandering because they cling to old knowledge rather than new revelation.

Paul’s concern was with men in the church who were spreading fallacy. While Paul doesn’t disclose the identity of these false teachers, we can tell from context who they were. These folks were some flavor of Paul’s favorite heretics, the Judaizers. These are teachers who sought to impose works-based salvation on Christians by insisting that compliance with Levitical law was still necessary for salvation. We can conclude this both from the mention of genealogies, an obsession among the Jews, and Paul’s later reference to their desire to be teachers of the Law (v.1:7).

That said, whatever their heresy may have been, the problem is the same with all false teaching. It is a stumbling block for unbelievers and a major distraction to the core work of the church. In fact, these men were not only causing distraction, they were causing division.

Let’s start with the distraction. Paul speaks of these men who, in the NASB translation, “teach strange doctrines.” But the problem isn’t necessarily that the doctrines are “strange” – it is that they are not the gospel.

In the Greek, that phrase is actually captured in one glorious word: ετεροδιδασκαλεω (heterodidaskaleo).  Say that ten times fast. The word actually means “to teach differently” or “to teach a different doctrine.”  Why do I make a big deal of this? Because any teaching that is not the gospel truth is a major problem – whether it’s strange or seems downright reasonable.

Heresy can easily don the cloak of reason and escape even the most mindful of eyes.

And yet it doesn’t take heresy to distract the church from its mission.  There are genuine disputes over non-essential matters that churches routinely allow to get in the way of the gospel. Maybe a lesson we can take away from this teaching is this; that we must steer clear of the distraction of disputes over nonessential matters. We must not lose sight that we are called to make disciples, not dispensationalists, or reformers, or Calvinists, or Arminianists. We are called to be witnesses, not rule enforcers or doctrinal parole officers.

Last summer, while in Kenya for a pastoral training session, I was part of a team that was interviewed on a Nairobi Christian radio station. People were invited to call in and ask about any topic related to Christian faith they wanted to.  You know what the most popular topic was? Tattoos.  Yes, the biggest concern people had was whether it is unbiblical to get a tattoo.  Talk about a surface-level distraction!

Still, you get my point. I am not saying these matters are of no significance. But I am saying they can drive us off task. What I am saying is let’s keep our focus on what we know to be ultimate.

That “God so loved the world that He gave His only Son, that whoever believes in Him should not perish but have eternal life.” – John 3:16.

And there is another vital reason for keeping our focus set on this core truth beyond avoiding distraction from our core mission.  Paul alludes to it when he mentions “myths and endless genealogies.”  Think about that.  Genealogies were important to the Jews because they demonstrated that the Jews belong to God; that they are traceable to His chosen. By the same token, they also could be used to argue that some – namely Gentiles – do not truly belong. In other words, they divide.

In the same way, we can allow our positions on non-ultimate things to divide us. Ask yourself this: “Have I ever thought my (superior) position on a particular doctrine sets me apart from those uninformed heathens?”  Ok. Maybe that’s a little more dramatic than where you went to.  But again, you see my point. We can allow differences to divide us by believing – as the Jews did – that we have the superior standing. By believing that God is in our corner.

God is not in your corner, or in my corner.  We are in His, and we are there by grace.  If we find ourselves getting distracted over matters that are not the core truth of the gospel, or divided over positions that are not founded upon the ultimate truth of Jesus, well then we end up in a different corner.  One belonging to the greatest distractor and divider there is – Satan.

If Satan can lure us into showing the world a distracted and divided church, well then he has accomplished his evil task. But if, in our witness, we are firmly united in the truth of the gospel no matter what our difference of opinions may be on other things, well the world will see something truly unique.

Paul admonishes us not to teach a different doctrine, and yet ironically in keeping faithful to God’s instruction through him, we will be different. We will be set apart in our united pursuit of the one and holy God.  May that be our witness.

Father in heaven, we praise and thank You that You have given to us the only truth we need in this world – the truth of Your Son, Who died for our sins and Whom You raised to life as our pathway to eternity with You. Jesus, help us to keep our eyes on You and our focus on the mission You gave us to make disciples of the nations and be witnesses of Your gospel truth. Amen.

Alec Zacaroli joined Burke Community Church in 2020, following a 20-year career in law and 7 years in journalism. He received a Master in Theology (ThM) from Dallas Theological Seminary in 2019, and also holds a Juris Doctor from American University, and a Bachelor of Arts in journalism from George Washington University. He and his wife, Amy, have four children, Nick, Sophie, Hannah and Rebecca. In 2003, Alec and Amy founded 25:40 (www.2540.org), a ministry dedicated to bringing the hope of Christ to orphaned and vulnerable children in rural, poverty-stricken areas of South Africa, where Alec lived as a child. In addition to their passion for the least of these, Alec and Amy enjoy hiking, exercising together, traveling, and most especially (as former reporters) reading and writing. Alec's call to ministry became clear to him through John 14:6 - when he found the imperative of sharing the truth that Jesus is the way, the truth and the life, and the only path to the Father was his reason for being.
Read More Posts